In this narrative, an American Navy lieutenant named Gullivar Jones finds himself somewhat magically-whisked away (via "magic carpet") to a fictional version of Mars (replete with oceans and vegetation) populated by two contrasting humanoid societies. When Jones first lands, he encounters the Hither folk, a frail, fairy-like race who spend most of their time avoiding work, getting drunk and generally having a festive time. In short order, he adapts to their lifestyle and becomes infatuated with a Hither woman named Heru (a Princess of the city Seth). However, Heru is soon kidnapped by the Thither folk, a "barbarian" people who levy severe taxes on the Hither folk and frequently take beautiful Hither women as tribute to their leader, King Ar-hap.

Jones soon goes on a quest across the Martian landscape in order to rescue his lost lover. On the way, he encounters exotic Martian beasts and various forms of lethal vegetation. Interestingly, he also begins to find common ground with the more "manly" Thither folk he encounters, although when he reaches Ar-hap's realm he doesn't hesitate to facilitate Princess Heru's release. Later in the final sequence, when Ar-hap's forces raid Seth in an effort to retrieve their King's stolen prize, Jones helps Heru escape once again, but he himself ends up in a much different relationship than the reader might expect considering the preceding events.

It may be interesting to compare Arnold's Hither and Thither folk with H.G. Wells' Eloi and Morlock races from The Time Machine, published ten years earlier. A satirical subtext might be sensed in Arnold's depiction of the two races, just as Wells' novel satirized the class struggle in England of his time (and Burroughs' Martian conflicts will later seem to evoke the struggle for dominance in North America between native Americans and European colonials).

In Sir Edward Bulwer-Lytton's 1871 short novel The Coming Race (or Vril, the Power of the Coming Race), an American explorer falls into a mine shaft and stumbles upon an underground race of somewhat "angelic" humanoids wielding a form of advanced energy called "vril" (hinted to be related to a electricity or magnetism). During his stay, the narrator describes the utopian society which the "Vril-ya" have achieved, although these people also have no qualms about destroying "inferior" races with their awesome weapons of mass destruction. Also, although the Vril-ya lead idyllic lives devoid of crime and stress, the creation of new art and literature no longer takes place, as there isn't any passion in their perfect lives. 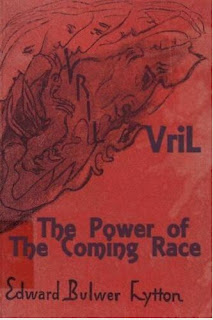 One of the other major differences between the American narrator's world of 1871 and the Vril-ya is that  Vril-ya women are the dominant sex in terms of courtship, and thus "chivalrous" women regularly propose to "coquettich" male partners. The female Vril-ya (also known as "Gy-ei") are also larger and more scholarly than the males ("Ana"), although after marriage a female Gy takes on a more subservient role. 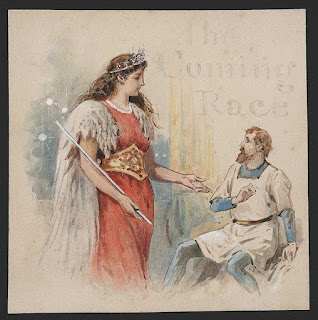 After a period during which the explorer is introduced to the various social structures and industrial centers of the Vril-ya, he attracts the attentions of the daughters of  some Vril-ya leaders. Unfortunately, due to his "impure" racial background, he is sentenced to death for even being considered for such a role. Fortunately, one of his admirers takes pity on him and helps him return to the surface. However, the narrator believes that one day the Vril-ya will invade the surface world and eradicate mankind for its inferior and aggressive ways.

In some ways an early "lost race" novel (a sub-genre later invigorated by H. Rider Haggard's King Solomon's Mines (1885)), the "Hollow Earth" aspect of the premise was famously explored seven years earlier in Jules Verne's Journey to the Centre of the Earth (1864). However, because Bulwer-Lytton's novel is dominated by long, almost academic descriptions of the Vril-ya's society (and has very little plot), it probably works more as a kind of speculative essay on a form of "anaemic utopia", rather than an "adventure romance". In some ways, H.G. Wells would revisit this idea with the "Eloi" of his novel The Time Machine (1895). The concept of a society with courtship rituals dominated by females would also be explored at greater length in Charlotte Perkins Gilman's novel Herland (1915). 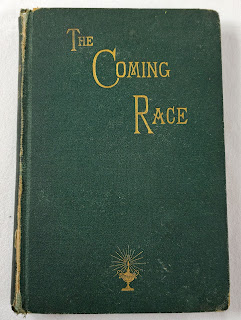 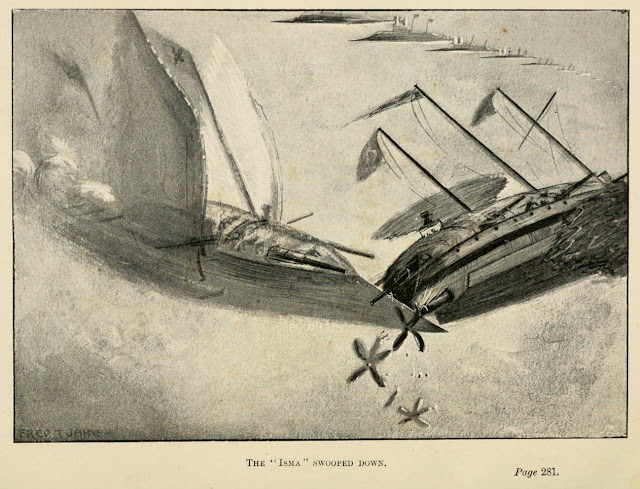 Although science-fiction space opera reached a "mature" form in the late 1920s with the novels of E.E. Smith and Edmond Hamilton, its roots lie in the "future war" thrillers and "invasion literature" of the late 19th century. This trend started out in 1871 with Sir George Chesney's "The Battle of Dorking", a novella in which England is invaded by a fictional (but German-speaking) country assisted by some form of secret technology. Due to this story's popularity with readers, other British invasion thrillers soon followed. However, while these stories usually featured traditional war campaigns in their narratives, in 1893 aspiring writer George Griffith (George Chetwynd Griffith-Jones) began incorporating more elaborately-drawn futuristic weaponry and vehicles into his fantastical war epics, allowing him to explore the tactical possibilities of these inventions. The two Griffith novels which best demonstrate this militaristic science-fictional direction are:

In these novels, Griffith describes advanced airships (somewhat inspired by the airborne Albatross found in Jules Verne's 1886 novel Robur the Conqueror/The Clipper of the Clouds) which fly at hundreds of miles per hour and are able up to reach the upper limits of the atmosphere. Additionally, these airships are equipped with artillery which can fire devastating explosive shells with a range of several miles. In these novels, Griffith's warring nations also possess fleets of high speed submarines armed with radar and torpedoes, as well as "war balloons" which are used for reconnaissance and bomb-dropping. This form of speculative future war/invasion romance would eventually develop into an early example of "proto-space opera" as can be seen in novels like H.G. Wells' seminal The War of the Worlds (1897), its sequel Garrett P. Serviss' Edison's Conquest of Mars (1898) and Robert William Cole's interstellar war saga The Struggle for Empire (1900). 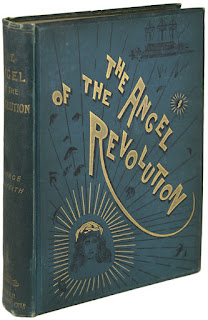 The Angel of the Revolution: A Tale of the Coming Terror (1893)

In George Griffith's 1893 novel The Angel of the Revolution: A Tale of the Coming Terror (initially serialized in 39 issues of Pearson's Weekly from January 21 to October 14 of the same year), a "future war" is described in which a coalition of nations headed by Russia invades Britain. At the same time, an Englishman named Michael Arnold discovers a new energy source which allows the development of powerful propeller-driven air-ships, armed with technologically-advanced artillery. Arnold is soon recruited into a secret global organization named the "Terrorists", whose aim is to abolish all forms of current government rule and replace them with a new world order based on peace and social equality.

The first part of the book describes Arnold's entry into the world of the Terrorists, and the establishment of an airship construction site in a hidden region in the heart of Africa. Eventually, war breaks out between the Franco-Slavonian League (headed by Russia and France) and the Anglo-Teutonic Alliance (led by Britain and Germany). Armed with "war balloons" (allowing them advanced reconnaissance and the ability to bomb targets from above), the Franco-Slavonian League soon conquers all of Europe and invades England. With Britain on the verge of total surrender, the Terrorists offer salvation if England agrees to the join their "Anglo-Saxon Federation". The King eventually agrees and the Terrorists' air-fleet decimates the invading forces, after which it abolishes warfare around the globe. 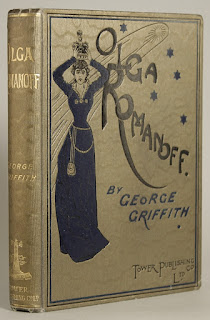 Olga Romanoff is George Griffith's sequel to The Angel of the Revolution, published only one year later and also serialized in 33 episodes as "The Syren of the Skies" in Pearson's Weekly from December 23, 1893 to August 4, 1894. Where the title of the earlier book referred to the angelic Natasha, the second novel is named after a ruthless "conqueress" named Olga Romanoff, a direct descendant of the defeated Russian Tsar of the first book.

Following The Angel of the Revolution, a century passes during which the Aerians essentially enforce peace and social justice on the governments of the world, and outlaw the independent development of air-flight technology by any subject nation. Eventually in 2030, as ordered by Natas in his final testament, the Anglo-Saxon Federation dissolves and the Aerians leave mankind to once again seek its own destiny and hopefully maintain the peace that has existed for the last century. Unfortunately, this relaxation of oversight allows Olga Romanoff, a descendant of the disgraced Tsar of Russia, to begin her own plans of vengeance and world domination, starting with the capture of the Aerian President's son, Alan Arnold. Using a secret drug formula, Olga mentally enslaves Alan and forces him to help her build a massive air-fleet in her secret base in Antarctica.

When Olga openly begins hostilities, she releases Alan and his fellow prisoner Alexis from imprisonment, believing them to be no longer useful to her. However, Alan manages to quickly rally his people's forces and deflect some of Olga's initial conquests. Olga then forms an alliance with the Sultan Khalid in order to build up an even greater coalition force. A global war on two fronts eventually breaks out, but the conflict is interrupted at its height when it is revealed that a comet will soon strike the Earth, destroying all life on its surface. While the Aerians race to create some kind of underground refuge, the skeptical Tsarina and her ally the Sultan complete their conquest of the rest of the world. However, in the end, Olga's victory quickly turns into a bitter defeat of the worst kind.